Circus Maximus GO is the first Virtual Tour in Rome to discover the Circus Maximus and participate in the race with the quadrigas.

It is an animated and interactive 3D historical reconstruction in Virtual Reality. It is proposed as a cultural learning product; educational; formative; fun and suitable for all age groups. Also, it is a solution for activities to be carried out in company and outdoors. The experience is an integration to the beautiful Circo Maximo Experience project of the Municipality of Rome and Zetema. It allows you to get to know and deepen the Circense Pump and participate directly in the chariot race.

Meet the staff at the agreed point and join the group. This will be happy to welcome you and give you all the necessary information on the unfolding of your Circus Maximus GO virtual tour.

With our animated 3D reconstruction integrated with professional multilingual music and audio tracks, exploring the Circus Maximus has never been easier and more exciting! All the contents within the reconstruction that you will observe, were handled by the Digilab Archeo & Arte3D department of the La Sapienza University of Rome.

Then put on a latest generation VR viewer and immerse yourself in Ancient Rome. During the experience you will be faced with steps to take and explore. Five different areas through the most significant stages in the history of Rome. From the founding of the city, which took place in 753 BC, to its maximum splendor.

Meet Romulus, the first King of Rome, intent on tracing the sacred and impassable border of his city. Around you the seven hills that enclose a thin and bare valley. Then take a look around, here is the Murcia Valley in all its splendor. Reclaimed by the Tarquini kings, it will host the first wooden amphitheater in history, the Circus Maximus.

Watch the city slowly take shape. You will have in front of you an urbanized city and set to shine. Here you will find the Foro Boario, the first market for the import and export of raw materials on the Tiber River.

Outside the Circus Maximus…

Before heading to the main entrance of the Circus Maximus, take the third step. Immerse yourself in the Severan era. It is precisely here that Rome reached its maximum splendor. Walk along the Via Appia Antica; meets the ancient Romans; soldiers; common people; admire the majestic Septizodium, the two-story fountain; then the Arch of Titus; the numerous tabernae; shops of all kinds; and finally, in the distance, you can see the overhanging and spectacular setting of the Colosseum.

After a short break, our staff will take you inside the amphitheater itself. Are you ready for an even more exciting adventure? Put on the VR viewer again and get ready to play. Virtually enter the imposing structure of the Circus Maximus. Look around. Precious marbles; columns; temples. A triumph of pride and grandeur. Did you know it could accommodate nearly 385,000 spectators? Hear the sound of the trumpets. These announce the beginning of the Pompa Circensis, the triumphant entry of the emperor followed by a parade of chariots; musicians; dancers and ornamental floats.

After learning the history of Rome and the Circus Maximus, all that remains is to participate in the competition. Put on the VR viewer for the last time and become the protagonist of the long-awaited chariot race. So, choose the faction; the color of the horse; grab the controller and go. Run as fast as you can. Overtake opponents. Avoid spectacular crashes and crashes like in the Ben Hur movie. Oh, no you fell! Wipe away the sweat and stand up. Force. You only have 7 laps around the plug to complete in order to win the winning prize. 1 million sesterces, the crown of that time and the crowd around you cheering and cheering on the new winner. Will it be you?

The meeting point established is Via di San Gregorio (corner of Via dei Cerchi). Here you will meet our staff featuring a black flag with a gold “Ancient & Recent” logo. 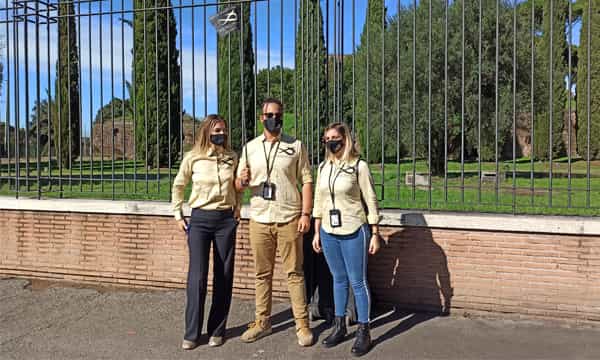 
Show only reviews in English (10)